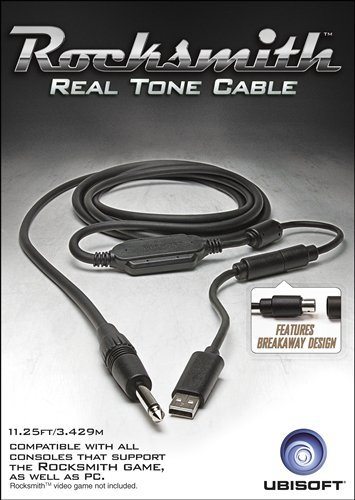 Rocksmith Real Tone Cable is compatible with all versions of Rocksmith and allows you to plug any real guitar or bass* directly into your Xbox One, Xbox 360, PS4, PS3, PC, or Mac. *Guitar / Bass requires standard 1/4" output jack
Allows you to plug in and record your instrument directly from our computer at 48kHz
Allows for real-time, responsive guitar play with Rocksmith software
Unique design ensures quick release of the guitar from your game console, Windows PC, and Mac to protect your gear and hardware
GAME NOT INCLUDED

Rocksmith is the first and only video game where players can plug any real guitar with a standard quarter-inch input jack into an Xbox 360 or PlayStation 3, and play through an in-depth library of music including everything from the latest hits to classic rock. The use of a second Rocksmith Real Tone Cable allows for simultaneous split-screen cooperative play. The 11.25 feet cable will also allow players to plug in and record their instrument directly into their computer at 48KHz. The unique cable design ensures quick release of the guitar from the gaming console to protect the player's gear.