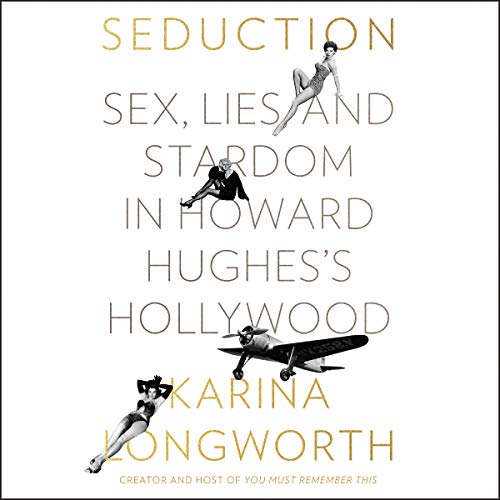 Go to amazon.com
Related posts
How to find the best art of seduction audiobook for 2019?

In this riveting popular history, the creator of You Must Remember This probes the inner workings of Hollywood's glamorous Golden Age through the stories of some of the dozens of actresses pursued by Howard Hughes, to reveal how the millionaire mogul's obsessions with sex, power, and publicity trapped, abused, or benefited women who dreamt of screen stardom.

In recent months, the media has reported on scores of entertainment figures who used their power and money in Hollywood to sexually harass and coerce some of the most talented women in cinema and television. But as Karina Longworth reminds us, long before the Harvey Weinsteins, there was Howard Hughes - the Texas millionaire, pilot, and filmmaker whose reputation as a cinematic provocateur was matched only by that as a prolific womanizer.

His supposed conquests between his first divorce in the late 1920s and his marriage to actress Jean Peters in 1957 included many of Hollywood's most famous actresses, among them Billie Dove, Katharine Hepburn, Ava Gardner, and Lana Turner. From promoting bombshells like Jean Harlow and Jane Russell to his contentious battles with the censors, Hughes - perhaps more than any other filmmaker of his era - commoditized male desire as he objectified and sexualized women.

Yet there were also numerous women pulled into Hughes' grasp who never made it to the screen, sometimes virtually imprisoned by an increasingly paranoid and disturbed Hughes, who retained multitudes of private investigators, security personnel, and informers to make certain these actresses would not escape his clutches.

Vivid, perceptive, timely, and ridiculously entertaining, Seduction is a landmark work that examines women, sex, and male power in Hollywood during its Golden Age - a legacy that endures nearly a century later.