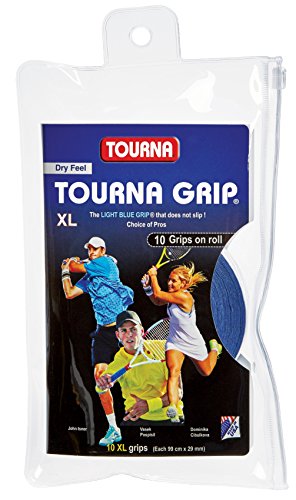 THE CHOICE OF PROFESSIONALS. Tourna Grip is the only grip that gets tacky the more you sweat. Tourna Grip starts with a Dry Feel but once you start sweating, the grip becomes more tacky and gives you a better grip. This is why it's so popular among pro's, college players, and amateurs alike. When match is on the line, use a grip that won't slip - Tourna Grip.
The proprietary technology of Tourna Grip enables moisture to wick moisture through the grip instead of back onto your hand which creates slippage. Most other tacky grips slip as soon as the grip gets wet with sweat.
Used by HUNDREDS of Touring Pros! Endorsed and used by top American player John Isner, top Canadian Genie Bouchard, the #1 most winning Doubles Team in the World - The Bryan Brothers, Hall of Famer Pete Sampras, World #5 Dominika Cibulkova, top 20 players Richard Gasquet, David Ferrer, Sam Querrey, Christina McHale, Kevin Anderson, and many more.
10 XL GRIPS PER PACK. Includes 10 strips of Finishing Tape. The Tourna-Grip Light Blue Color is a Federally Registered Trademark. You can identify Tourna Grip by its famous blue color on TV, magazines, or on the court next to you! Tourna Grip is also the only tennis overgrip MADE IN THE USA!!!
HIGH PERFORMANCE GRIPS BY TOURNA are ideal for tennis but also great for Pickleball paddles, Baseball bats, Badminton racquets, Squash Racquets, Racquetball Racquets, Ping Pong Paddles, Golf Grips, Bike Handlebars, Archery, Rowing, Dumbbells, Fishing poles, you name it.

Tourna-Grip Original XL: This is the original overgrip used by professionals including Pete Sampras, James Blake, the Bryan Brothers, Sam Querrey, David Ferrer, John Isner, and many more. Its used by more pro and college players than all other grips combined. Why? Because Tourna-Grip actually performs better with moisture when all other overgrips on the market get slippery with moisture.