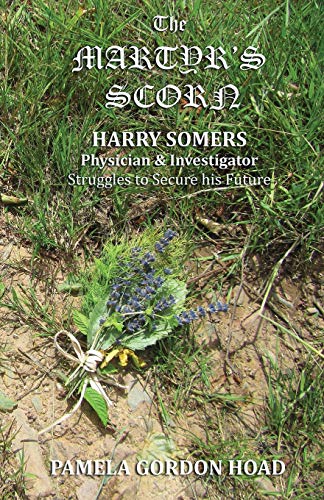 The Martyr's Scorn follows on from the conclusion of The Cherub's Smile in 1450. To avoid imprisonment Harry Somers accepts the protectionof the Church and a challenging commission in Winchester. The acquaintances he encounters there lead him to investigate distasteful allegations concerning a murder and to make a choice, when he forms a judgement on a colleague's character, which has far-reaching consequences for his own future. Eventually he needs to move away from the town but when he travels to Yorkshire and Dublin old enemies menace him and the good faith of former supporters is uncertain. When he returns to London his prospects become increasingly entwined with the conflicting interests of rival noblemen and their followers, while his personal happiness is threatened by distressing inconsistencies in the relationship which becomes central to his life. He strives to fill his professional role with integrity, albeit recognising there are limitations on medical knowledge at the time, and is confronted with a range of conditions generally believed to be beyond the skill of a physican and attributable to supernatural influences. Caught up in the turbulent history of the period, he is forced to observe the downfall of a man he knows well and he becomes aware that the intriguing woman he loves may have secrets which threaten his peace of mind. Violent events bring the story to an end and set up the scene for the fifth book in the series.