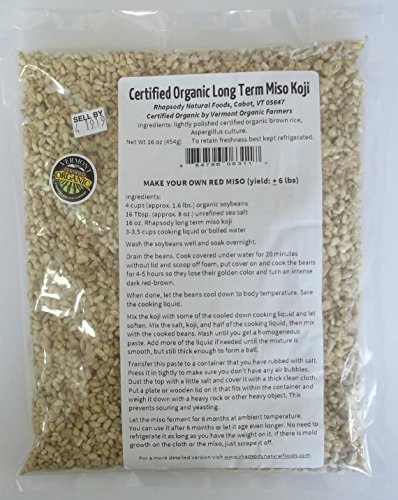 Koji is steamed barley or polished rice inoculated with the Aspergillus oryzae culture. It is responsible for the fermentation process of not only amazake (kome koji), but also miso (rice or barley koji) and a number of other fermented foods. Package includes directions. Traditionally this is what the different kinds of koji are used for: If you want to make amazake or rice milk, order the amazake koji. For miso, either choose short term koji, for the sweeter miso varieties, or long term or barley koji for the darker heartier miso varieties. If you want to use the koji to ferment or marinate vegetables or meat any koji will do; they all contain powerful enzymes that will break down protein, carbohydrates, and fats. Subtle flavor differences are the result of the proportions in which these enzymes occur in any particular koji. Not sure? Start with short term koji as an all-round koji, gain some experience with that, then move to the others varieties to expand you horizon. Color varies from greenish white to earthy green.